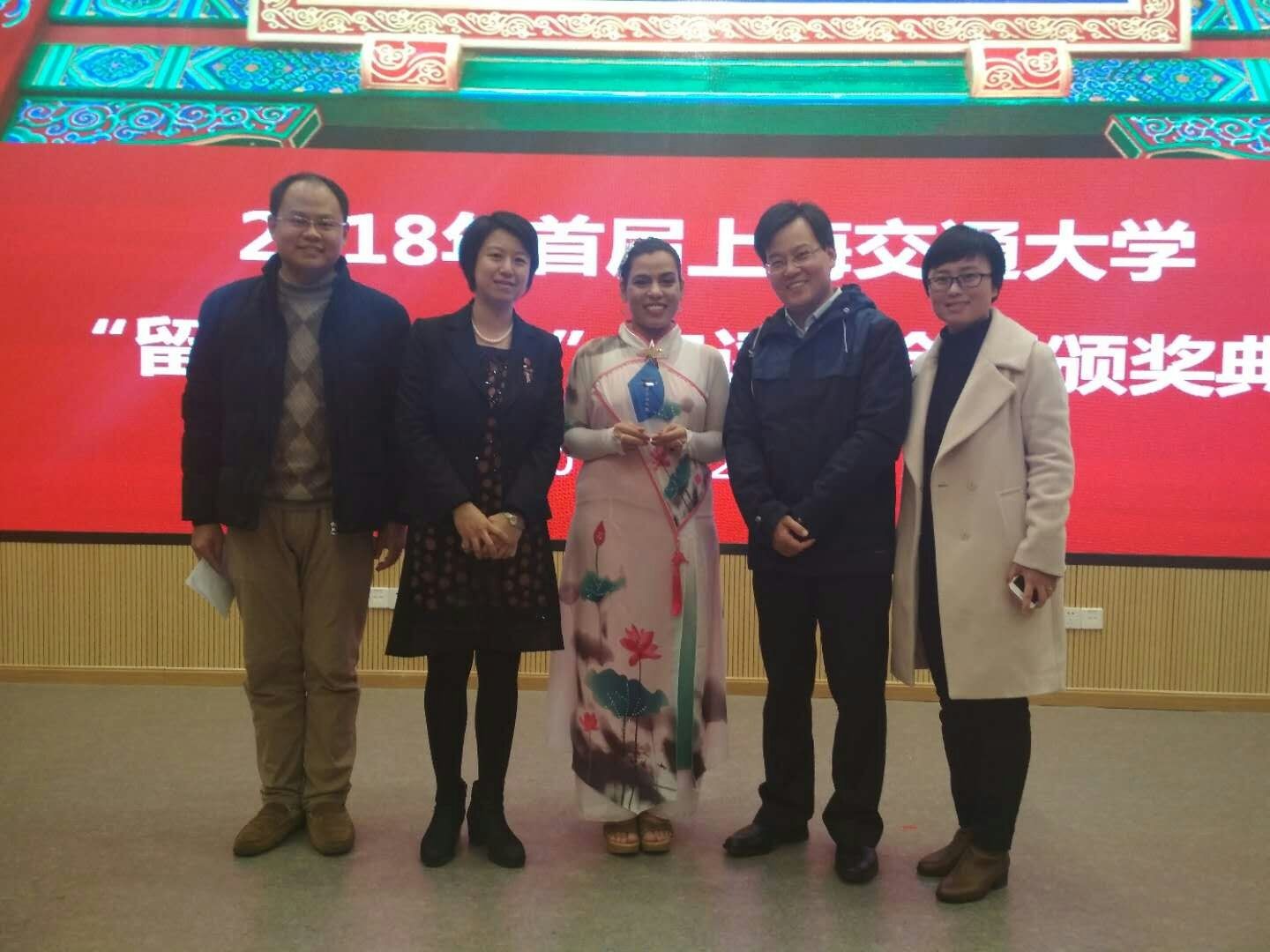 Nabila Mehwish, International PhD in our group, has awarded the Star of International Students of Shanghai Jiao Tong University Year 2018 on December, 12.

Nabila participated in competition of the first session "SJTU International Student Stars" for year 2018，which had three stages. She was one of 34 excellent and friendly international students recommended by various schools since the start of the competition on October 16. The preliminary contest was hold at the conference hall of the information library in Minhang campus on November 20. This contest includes the presentation of "My story of studying abroad" and the knowledge of Chinese culture. Finally, 8 students including Nabila were admitted to the final match.

On the afternoon of December 12, the first session of Shanghai International Jiao Tong University “Stars for International Students” Final Appraisal and Awarding Ceremony were held at the Minhang Campus Academic Activity Center. More than 100 representatives of foreign students attended the event. In the final evaluation review, eight candidates competed through the “My Stay in China Story” speech and the Chinese cultural cognition display. The candidates’ performances varied greatly, their love for Chinese culture, their hard work for scientific research, The work of students' research and extracurricular practice left a deep impression on the judges and audiences. 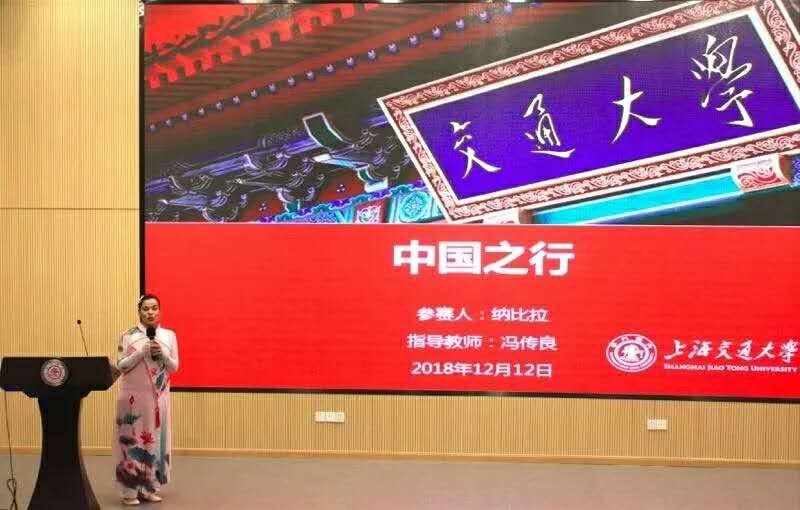 Nabila devoted herself to academic research and published high-level essays. She has helped China-Pakistan friendship and has participated in China-Pakistan cultural exchange activities for many times, witnessing the “One Belt, One Road” strategy. She is active in all stages of campus culture and conveys China-Pakistan friendship with singing, dancing, academic exchanges and passion. In the Chinese cultural cognition display, she performed a Chinese traditional dance "Shujian", which was moving and attracted people to cheer. So, she was one of three students who won the award the honorary title of “Star of International Students” for the year 2018. 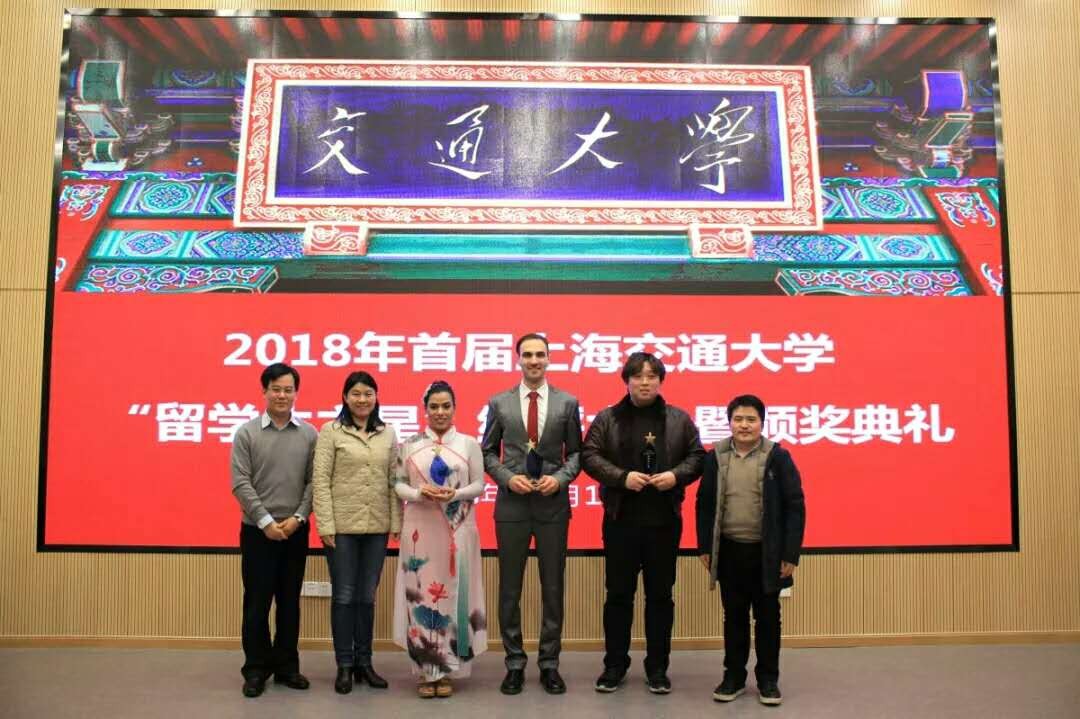 Nabila Mehwish has a very sound academic as well as co-academic background. She is a graduate of MS Chemistry from the Quaid-i-Azam University (QAU) of Pakistan with 4 publications during her MS. She has also been the secretary of the Rang-i-Hayat Society of QAU Chemistry Department which is behind every literary function of QAU. She also has a gold medalist for master in education on provincial level in Pakistan.

She joined The Feng Group in SMSE@SJTU for PhD degree under supervision of prof. Feng Chualiang in September 2016 and has been very prominent due to her active participation in many functions organized by international students union (ISU). She was elected as Vice President of Pakistan Student Association (PSA) in 2017 and has won the first prize for team Pakistan as PSA representative in 2018 Mini Expo. Talking about her academic achievements until now in SJTU, she wrote a very good review of her field focusing on the state-of-the art of hydrogels in bioluminescent applications which was published by Materials Horizon (IF: 13) which is a testimony of her research progress. She also has two co-authors papers under her belt.